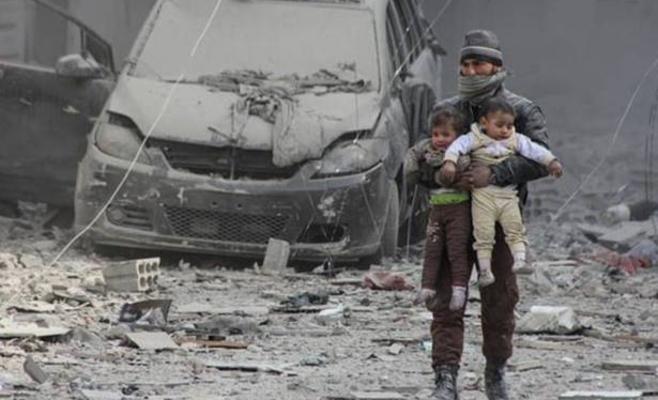 To the Distinguished Representatives:

IT MUST BE STOPPED

The famed civil rights leader Martin Luther King once warned humanity that: “We will have to repent in this generation not merely for the hateful words and actions of the bad people but for the appalling silence of the good people.” So it is that your silence and your lack of response to the continuation of the Syrian humanitarian crisis will eventually lead, as the philosopher Noam Chomsky predicted, to the birth of a more dangerous monster than ISIS.

As the pace of fighting and killing in Syria accelerates with bloody consequences, the role of the international community has mysteriously, and contrary to expectations, regressed. The effective functioning and the resolutions of the United Nations have been disabled by the non-compliance of the Syrian regime and its supporters.

The regime and its supporters have not complied with the alleged “truce”, just as they have never complied with any such agreements before. On the contrary, they have developed a policy of brutalization by targeting Eastern Ghouta with warplanes, cluster bombs, explosive barrels and poisonous gases, while at same time the regime expands the bombing circle and aggression on the entire Syrian territory.

For the last seven years the Syrian regime and its allies (Iran, Russia, Hezbollah, in addition to Iraqi, Iranian and other sectarian militias) have justified their crimes against our people and country under the pretext of fighting terrorism. This pretext has succeeded in preventing the international community from intervening and shouldering responsibility for the protection of civilians in compliance with security council resolution 1674 /2006, as well as the Responsibility to Protect (R2p) Principle which was endorsed by all member states of the United Nations at the 2005 World Summit to prevent genocide, war crimes, ethnic cleaning and crimes against humanity.

In September 2017, in his remarks to the United Nations General Assembly informal dialogue on the responsibility to protect, the Secretary General António Guterres confirmed that “should national authorities manifestly fail to protect their populations from genocide, war crimes, ethnic cleansing and crimes against humanity, then we must be prepared to take collective action, in accordance with the Charter, including Chapter VII, on a case-by-case basis.” He concluded his remarks stressing that “It is time to move beyond the conceptual debate towards improved protection of people from atrocity crimes.”

A few days ago on 26 February, the Jordanian Prince and UN High Commissioner for Human Rights, Prince Zeid Raad Zeid al-Hussein, said: “Syria must be referred to the International Criminal Court.” On 24 February , the Security Council, acting unanimously, adopted a resolution demanding the cessation of hostilities in Eastern Ghouta and in the whole of Syria without delay for at least 30 consecutive days, ensuring a “durable humanitarian pause” to enable weekly humanitarian aid deliveries and medical evacuations of the critically sick and wounded.

In spite of local and global demands and condemnations, Ghouta is under siege, populated areas are being targeted and civilians are being killed, all under the pretext of fighting terrorism, while all the world is well aware that the location and actions of the said terrorists are not in the targeted populated areas. Instead, this is just a dirty and cynical ploy by the regime and its supporters to force inhabitants to flee in preparation for complete demographic change in Syria, as has already been seen in Aleppo, Homs, Zabadani, Dariya, Quosair, etc.

Syrians are witnessing the massacre of our people, under international and official disability and in the face of the United Nations’ reluctance to issue any resolution obliging Russia and the Syrian regime to stop these abuses. The regime is blatantly circumventing the international community and ignoring UN resolutions in its use of chemical weapons,  it is preventing the United Nations from providing medicines and medical equipment to the victims and is stealing most of the food aid intended for civilians.

We, the undersigned, are a wide representation of Syrian civil society. We call on the international community represented by the General Assembly of the United Nations, and on all secretaries of the international and regional organizations, including the Arab league, to act immediately to issue a binding decision to achieve the following:

With regard to a political solution in Syria, the signatories stress the significance of adherence to the Geneva approach 1 and the UN resolutions 2118 and 2254 in order to eliminate the tyrannical regime with all its pillars, and to achieve a political process with set goals and a timetable for the establishment of a democratic state whose constitution is committed to equal rights and of citizenship for all without distinction as to race, creed, belief or sex.

We affirm that as Syrians we are an unarmed people being besieged, surrounded by an international suspicious silence which can only be interpreted as not only approving what is happening, but complicit, overseeing it and directing the implementation and completion of the annihilation   of the Syrian people.

List of Signatories of the Plea to stop war in Ghouta & Syria, and to send International Observers