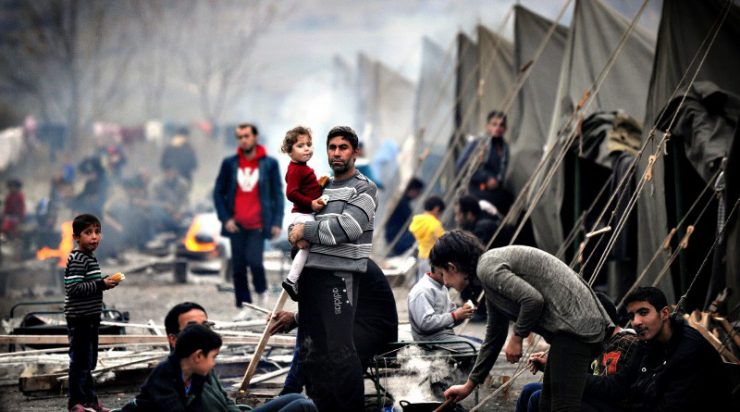 Human traffic nets did not appear as the result of the Syrian revolution, rather these were existing, operating on the Turkish territory for many years. The operating nets have witnessed a phase of climax: After the end of the Iraq war in 2003, where most immigrants were of Iraqi nationalities. The transit method was across the Syrian border to Turkey, and from Turkey to Athens. This migration continued from 2006 until the end of 2010. Afterwards, the stories of Libyan, Moroccan, and Syrian immigrants emerged. Interestingly, Iraqi immigrants still follow the exact path to this day

The majority of immigrants may be divided into the following sections:

Financially Wealthy: Some Iraqis who benefited from the al-Maliki regime, sought to transfer their money into gold and jewelry. They traveled from Iraq to the Istanbul Airport as tourists, and from Istanbul they contacted smuggling networks that provided them with proper means of movement towards Europe. However, wealthy Syrians are able to travel with greater ease towards Turkey. These individuals seek their options to travel to Europe for the sake of safety. Their main task is to transfer their money to Europe, thus relying on the role of mega financial smuggling networks that are controlled by the Russian Mafia

On the other hand, a group of migrants residing in the Persian Gulf mostly receive travel visas from European, American, or Canadian embassies. As soon as they arrive in Europe, they begin asylum procedures, mainly on the pretext that the Arab or Persian Gulf does not provide stability or recognition of nationality to the Syrians or Iraqis who are working there

Poor and lower class individuals are divided into several groups:

Kurds: Kurdish families typically have relatives either in Germany or Belgium or Austria. These families facilitate the transfer of their relatives from Athens towards Western European countries. They simply send their passports to relatives in Athens, so that the illegal immigrant uses the passport of a family member who looks like them. Most of the immigrants are Kurds, and they generally possess similar facial features, to an extent. This can complicate matters for airport security and lead to an increase of migrants entering under false identities

Arabs: Most Syrian and Iraqi Arabs are easily able to cross the Syrian-Turkish border. Despite new security procedures pursued by Turkish officials, penetrating the border is still possible. This may take place even without coordination of smuggling networks, where Turkish relatives living in bordering towns assist their relatives through facilitating their entry into Turkey, through providing those on the Syrian side with the movements of the Turkish Customs and Ganderma (Border Guards)

Non-Arab Nationalities:  Afghans, Pakistanis, and Iranians obtained false Syrian passports, and claimed they were Syrians in order to seek asylum in Europe. The overall process of receiving those fake passports is not difficult, since the majority of smuggling networks are historically linked with the Syrian intelligence. Officials print the image and full information of anyone on an official Syrian document, in return for a sum of money that varies between $2,000 to $9,000. The price varies depending on the smuggling network and the speed in which the task is carried out. Some smugglers were able to get the seals of the Syrian government after spreading control over the directorate affair offices in Raqqa ,Deir ez-Zor , Hasaka and Aleppo. They began printing and selling, on their own, not only such passports, but copies of individual civil records, statements or personal identity information. Of course, each document has a certain price which is usually negotiable

The Road Towards Europe: Syrians and Iraqis are seen in Street cafes on Taksim street. Some attract smuggling or trafficking nets, which usually involve young men. After the migrant tells their story, the young smuggler shows sympathy to them, and they discuss the possibility of finding a group who can help them to travel to Europe.  Of course, many of these young people may be swindlers, but some are involved in smuggling rings. Smugglers carefully choose the proper time and place to travel, on the condition that the money is not paid until they reach Athens

Migrants arrive on the Greek island of Lesbos, after crossing a part of the Aegean Sea from the Turkish coast. October 2, 2015 REUTERS/Dimitris Michalakis

Travel Routes from Istanbul: Migrants may travel from Ataturk Airport in Istanbul after receiving a false passport, which might be Portuguese or French. The cost is approximately $15,000.  If the destination was towards the United States, the cost of such a passport may increase in the $20,000 to $25,000 range

Traveling By Sea: Since the middle of 2015 there has been a cease in the movement of yachts transporting illegal immigrants because of sanctions imposed by the Turkish government. A favored method by smuggling networks is using motorized rafts. Perhaps more common routes are from the Izmir area towards three Greek Islands, and the most known is Korres Island. The cost of movement ranges from $800 to $1,100 per person

However, traveling is not preferred during periods where rough seas are prevalent. This is why the flow of migration throughout the winter months will be limited. Some of the smuggling networks are, until present, depending on using boats, with costs that range from $2500 to $3000. The yachts may not dock on the Greek beaches, the rubber raft is inflated on the board of the yacht and before reaching the beach, immigrants ride it and head towards the beach. Some who traveled in a similar manner assume the likeliness that yacht owners are coordinating their movements with Turkish and Greek security officials. The duration of travel by a motorized raft typically does not exceed 45 minutes

Iraqi refugees arrive on a raft on a beach of the Greek island of Lesbos, January 1, 2016 REUTERS/Giorgos Moutafis

From Greece towards Europe: As soon as migrants reach the Greek islands, authorities move them towards Athens. Some of them continue to coordinate with smuggling networks that take the initiative to move them through another sea route from Greece to Italy. In return they pay about 6,500 euros, in addition to transportation fees from the Greek islands to Athens, at a cost of nearly a thousand euros. But this option has become too taxing for migrants, especially when compared to the following methods:

Traveling from Airports in Athens: Migrants receive a forged and fake passport at a cost ranging between 2500-3000 euros, which contains the seal of one of the European countries and then the photo of the passport is changed or another passport that belongs to one of his relatives who looks like him is adopted. However; all smugglers keep on alerting immigrants of the necessity of not causing suspicion while dealing with the airport officers and the need of smiling all the time. Even when the  Greek officer discovers a passport forgery , the only procedure to be taken is the expulsion of migrants from the airport where he seeks getting another passport from another smuggler․ Generally;  smugglers are too many in Greece and they move in a rather noticeable manner in front of hotels and in cafes and talk freely, which gives the impression that the Greek government ignores them or they are a part of public corruption Movement in Greece. Moreover; some Christianity cases those who revealed their fake passports at the airport have been overlooked by the airport officers and traveled to Europe․

Traveling by road: The vast majority pursue this method due to its low cost. Transportation fees from Greece to Macedonia and Serbia are about 10 euros by bus. As they reach the borders of Macedonia, the government transports them by bus to the Austrian border. If they choose, migrants may travel by bus at a cost of nearly 40 euros to reach Germany. This is the currently the favored country of migrants, and the entire trip is approximately 12 hours

Near the Greek village of Idomeni, September 10, 2015. REUTERS/Yannis Behrakis

At nearly 200 euros, the train might also be used as a means of travel. Migrants may get a train ticket at a lower price if is booked on the internet, at 120 euros. Relatives take immediate action in booking a seat on a train or bus from the moment their family members reach the Greek territory

The Greek-Macedonian border, near the village of Idomeni, Greece. January 21, 2016. REUTERS/Alexandros Avramidis

Procedures to Regulate Immigration: As long as the Assad regime and terrorist groups are present in Syrian and Iraqi territory, immigration justification will never stop or end. Both groups are criminally threatening the safety of civilians. Security measures taken by both the Europeans along with Turkey would prove inadequate and unsuccessful, due to the fact that the Turkish-Syrian borders are wide. The decision of the Turkish government to impose visa restrictions on Syrians, would only be applied by the wealthy or those who have touristic intentions. As for the remainder of the Syrians and Iraqis, they are capable of breaching the border and accessing the road to main smuggling points, and the new measures might only lead to increasing costs for migrants

I hope that European governments may initiate a law prohibiting the reception of illegitimate immigrants, and organize the operations of exclusive reception of refugees registered in the Higher commissions for displaced people in Lebanon, Jordan and Turkey. These are the groups who are in more urgent humanitarian need, and the majority of the illegal immigrants who took the places of those registered at the commissions. Furthermore, some migrants must associate with criminal personalities in international smuggling networks to regulate the mechanism of their travel. Unfortunately, governments of Europe take into consideration those who have been associated with criminals and neglect those who are committed to international law and to the Commissioners of refugees

You can view this report here